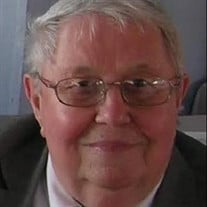 Arthur W. Smith April 13, 2020 Arthur Williams Smith, 99, peacefully passed on ahead, Monday, April 13, 2020. Born in Kendaia, NY, on September 23, 1920, he was a graduate of Ovid High School and Syracuse University, where he played clarinet in the marching band. He was a U.S. Army veteran of WWII, serving with the Corps of Engineers in Alaska. A charter member of the Syracuse Chapter of the Piano Technicians Guild, his career as a piano tuner in central NY and Florida spanned six decades. He had been a long-time active member of Andrews Memorial United Methodist Church in North Syracuse, where he established and directed hand bell choirs in the 1960s and 70s. His piano playing was widely admired, and was his preferred form of self-expression. He was predeceased by his wife, the former Marietta Wells, in 1973, and his brother, Howard in 2007. He is survived by his three children, Arthur "Nick" Smith (Gale) of Manlius, Betsy Halter (Jeffrey) of Cincinnati, and Melissa Delmonte (Steve) of Buffalo; nine grandchildren, Jason, Scott, Amber, Olivia, Marietta, Avery, Bethany, Andrew, and Thomas and seven great grandchildren, Linken, Hudson, Rivan, Opal, Nova, Sagan, and Wesley. A Graveside Blessing will be at 11 am on Saturday, September 19th in Greenlawn Cemetery, 2929 Warners Road, Warners.

The family of Aurthur Smith created this Life Tributes page to make it easy to share your memories.