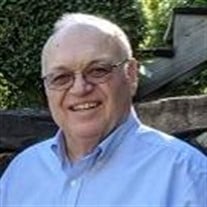 David W. Brown, age 75, passed away peacefully on December 1, 2021, at his dream house on the shores of Oneida Lake. Dave, predeceased by his parents Gerald and Doris “Gram” Brown, is survived by his sister Patricia Brown of North Syracuse, and his loving wife of 53 years, Geraldine W. Brown. He will be greatly missed by his three sons, daughters-in-law, and their children: Casey, Nicole, Victoria, and Evan Brown of Cicero, Corey, Laura, Chloe, and Ruby Brown of Weedsport, and Craig, Danna, Cameron Brown, Jordan McCormick, Maegan McCormick, Brynna McCormick of Baton Rouge, LA. Those who know him called him “Dave,” a softer, friendlier version of his formal name. In the 1960s, while attending North Syracuse High School, Dave earned the all-county center designation, going on to continue his love of football while playing four years at SUNY Brockport. He commented that he never grew tired of playing the game. At Brockport, he met his wife, Geri, with whom he raised a family for 53 years. Upon retirement from education administration at North Syracuse and Baldwinsville Central Schools, Dave and Geri enjoyed traveling to many locales, including Hawaii, Alaska, and Europe. When not traveling, the two frequently cheered on the SU football and lacrosse teams, with his beloved English Cream Golden Retriever, Mulligan, faithfully by his side. Dave enjoyed participating in golf and downhill skiing with friends and family. Dave’s legacy is visible in his children and grandchildren. You can see Dave in a determined manner that his oldest son, Casey, coaches CBA football and in the way he interacts with his students, mirroring Dave’s years as a physical education teacher. Dave’s love of playing shines in the commitment and sportsmanship of his grandson, Evan, on the CBA football team. Dave was incredibly excited to see the CBA team reach the state championship this season, and will undoubtedly be cheering the team on from heaven. Dave’s kindness and service are demonstrated in his granddaughter, Victoria’s, nursing studies, and in her graceful dancing. Dave’s way of accepting people is shown when his middle son, Corey, greets his customers, treating them with fairness and respect. Dave’s modeling of determination and perseverance is seen when his granddaughters, Chloe and Ruby, swim to the wall to make their best time for the Liverpool swim team; they will forever hear his words: “churn up that water, girls.” In Craig, Dave’s youngest son, one can see Dave’s features and witness joy when Craig laughs, attesting to Dave’s love of life. In Cameron, Dave’s oldest grandson, one notices a shared sense of curiosity, love of learning, and compassion. Dave’s love of family was evident during many holidays and celebrations as he sat at the end of his crowded dining room table reminiscing with his younger sister, Pat, or with his late mother, Doris, who everyone called “Gram.” Inevitably, some funny story would make Dave laugh with his shoulders rising up and down with a beautiful smile on his face. Dave was a constant, steady presence--someone who always showed up to paint a wall, hang a picture or lay some flooring. Dave made people feel like they belonged. Dave listened and gave sage advice. Although his family and friends will miss “our Dave,” we will celebrate his life by embodying his best qualities: integrity, compassion, and service. The family plans to host a celebration of Dave’s life this summer. Dave’s grandchildren request that in place of flowers, donations be made to Friends of the Rosamond Gifford Zoo, 1 Conservation Place, Syracuse, NY 13204, a place he frequently enjoyed taking them to.

David W. Brown, age 75, passed away peacefully on December 1, 2021, at his dream house on the shores of Oneida Lake. Dave, predeceased by his parents Gerald and Doris &#8220;Gram&#8221; Brown, is survived by his sister Patricia Brown of North... View Obituary & Service Information

The family of David W. Brown created this Life Tributes page to make it easy to share your memories.

Send flowers to the Brown family.