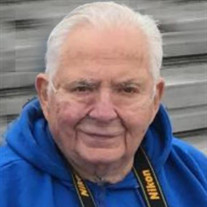 Floyd J. "Corky" Dufore, 90, of North Syracuse, died on Wednesday, August 18, 2021. Born in Ogdensburg, New York, he was a 1949 graduate of Assumption High School, Syracuse, graduated from the Community College of the Air Force, Columbia College and received his masters degree in 1989 from SUNY Oswego. Mr. Dufore served 35 years with the Air National Guard 174th Tactical Fighter Wing. He graduated from Lowry AFB radar school, was part of the scuba team, the rifle team, the base honor guard and retired in 1986 as Senior Master Sergeant. In his second career, Mr. Dufore taught at Fowler High School in the Liberty Partnership Program for 13 years. He was a substitute teacher in the Central Square and Phoenix Central Schools until 2015. Predeceased by his parents, Alfred Joseph and Margaret E. (Williams) Dufore and a son, David, in 1983, he is survived by his wife of 68 years, the former Joan A. Fergerson; three children, Denise Wargo, Douglas (Marie) Dufore and Deborah Ottaviano; three grandchildren, Robert, William and James and nephews. Calling hours will be Tuesday, August 24, 2021 from 4 to 7 pm at Fergerson Funeral Home, 215 South Main Street, North Syracuse. Mass of Christian Burial will be Wednesday, August 25th at 10 am at the Assumption of Mary Church, 812 North Salina Street, Syracuse. Burial with full military honors, rendered by the 174th TFW, will follow in North Syracuse Cemetery. Donations may be made to the food pantry of Assumption Church.

The family of Floyd "Corky" J. Dufore created this Life Tributes page to make it easy to share your memories.

Send flowers to the Dufore family.