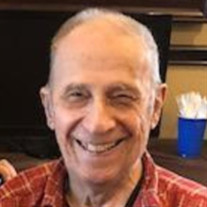 Frank A. Cassano, 92, of Estero, FL, formerly a 54-year resident of North Syracuse, NY, passed away peacefully at the Hope Hospice House in Cape Coral, FL on October 19, 2021 with his daughter and granddaughter at his bedside. He was a loving and devoted son, brother, husband, uncle and father. He is survived by his daughter, Sandra "Sandee" (Mark) Brown; his granddaughter, Gretchen N. Krohn and his grandson, Theodore S. Krohn II; his brothers, Michael (Sarah), Peter (Lee) and John N.; his brother-in-law, Joseph (Arlene) Swieck; many nephews, nieces, great-nephews and nieces and a great-great nephew and a great-great niece. Frank retired in 1992, after 41 years as a machinist/engineer from Killian Manufacturing in Syracuse, NY. He was a communicant of Sacred Heart Catholic Church in Cicero, NY. He and his late beloved wife, Mary Jane, volunteered for many many years delivering meals to those in need for NAMOW (North Area Meals on Wheels). Frank also served on the North Syracuse Central School District Board and on the Village of North Syracuse Board as a member and Deputy Mayor after serving as the Village's Purchasing Agent. He also gave back to his community through his years of service to the North Syracuse Little League and Babe Ruth Baseball League putting his metalworking expertise to frequent use. Bowling Green also availed itself frequently of his knowledge and expertise with their pin-setting and ball return equipment. He was an avid bowler on the Killian team for many years and later in life loved playing nine holes of golf at Wildwood. As a proud husband and father, Frank always supported and encouraged Mary Jane as a member of the Sweet Adelines, as well as Sandee's participation in band and Tommy's participation in America's Pastime-baseball and his grandchildren's varied interests and pursuits. He attended almost every event, competition, parade and game, always supporting them by applauding and cheering them on. Win or lose, he was always in their corner and appreciated their efforts. Of course, his North Syracuse neighbors remember him as the always smiling and ready 'fixer' of all things mechanical-for the adults, lawnmowers, cars, tools, and snow blowers, to name a few. And, he was always ready at the call or visit from any child in the neighborhood with a broken bicycle, skateboards or any other sort of item that meant something to them. He and Mary Jane, along with their fellow 'Wilshirl Drive gang' of adults-Russ & Peg Hewitt, Adam & Marge Shaffer and Paul & Doris Graham (all of whom sadly pre-deceased him), enjoyed regular monthly 'card nights' and for 25+ years celebrated New Year's Eve together with a themed party at one of their homes. Frank cherished all these memories through many years until Alzheimer's Disease started slowly erasing them until most disappeared. So, in lieu of flowers, Frank's family requests contributions, in his memory, be made to The Dubin Center, 12468 Brantley Commons Court, Fort Myers, FL 33907. www.dubincenter.com This wonderful agency was founded in 1995 to provide assistance to families of individuals suffering from Alzheimer's Disease. Its staff and volunteers provide local expertise with resource referrals, education and support groups, all of which has proven invaluable to Frank's family these last seven years. Calling hours will be Thursday, November 4th, from 4 to 7 p.m. at Fergerson Funeral Home, 215 South Main Street, North Syracuse. A Catholic Funeral Mass will be offered on Friday, November 5th at 10 a.m. at Sacred Heart Church of Cicero, Brewerton Road, Cicero, followed by niche placement in North Syracuse Cemetery.

Frank A. Cassano, 92, of Estero, FL, formerly a 54-year resident of North Syracuse, NY, passed away peacefully at the Hope Hospice House in Cape Coral, FL on October 19, 2021 with his daughter and granddaughter at his bedside. He was a loving... View Obituary & Service Information

The family of Frank A. Cassano created this Life Tributes page to make it easy to share your memories.

Send flowers to the Cassano family.