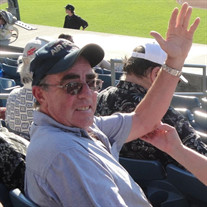 Gary Lee Kehl, 76, of Cicero, NY passed away on Tuesday, May 25, 2021. He was born on March 8, 1945, in Marietta, OH, to the late Harry Henry and Julia Edith (Perry) Kehl. After graduating high school, he enlisted in the United States Air Force where he was a linguistics specialist, fluent in Arabic and Russian. While serving he was stationed in Nuremberg, Germany; Athens, Greece; San Angelo, TX; and Fort Meade, MD. Much of his time in the Air Force was spent conducting reconnaissance missions over the Mediterranean. After retiring in 1986, with over 20 years of service, Gary and his family moved to Cicero, NY where he was the store manager at Hechinger’s for 16 years. In his later years he was a member of the Mattydale VFW Post 3146 and a member of several bowling teams at Strike ‘N Spare Lanes. He enjoyed spending quiet time in Old Forge, NY at the cabin that he helped his late in-laws build. An enthusiastic sports fan he was passionate about the Cleveland Indians, Ohio State Buckeyes, and the Syracuse Orangemen. He was an avid reader and could often complete several books a week. Predeceased by his wife of 46 years, the former Linda Joyce Clayton, he is survived by his children, Charles R. (Rachel) Kehl, Richard M. (Elisha) Kehl and Judith A. Joyal and grandchildren, Stephen, Charles, Savanna, Caitlin, and Julia. Calling hours will be Friday, June 11, 2021, from 9 to 11 a.m. at Fergerson Funeral Home, 215 South Main Street, North Syracuse. Burial with Military Honors will follow in Greenlawn Cemetery, Warners, NY. After the burial service please join the family for a Celebration of Life gathering at the Mattydale VFW Post 3146 located at 2000 Lemoyne Ave from 2 to 6 p.m. Flowers are welcome. In addition, donations may be made, in Gary's honor, to the American Cancer Society; https://www.cancer.org/involved/donate or the Wounded Warrior Project; https://www.woundedwarriorproject.org/donate.

Gary Lee Kehl, 76, of Cicero, NY passed away on Tuesday, May 25, 2021. He was born on March 8, 1945, in Marietta, OH, to the late Harry Henry and Julia Edith (Perry) Kehl. After graduating high school, he enlisted in the United States Air Force... View Obituary & Service Information

The family of Gary L. Kehl created this Life Tributes page to make it easy to share your memories.

Send flowers to the Kehl family.