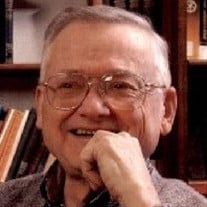 Dr. Gordon Boudreau, Professor of English Emeritus at Le Moyne College, died on November 18, 2020 at Kendal on Hudson,Sleepy Hollow, New York. Born May 17, 1929, at Marshall, Minnesota, he was the son of Louis Boudreau and Lena (Rykhus) Boudreau. A 1947 graduate of Worthington, MN HS, he received his B.A. from St. Mary's College, Winona, MN, in 1951, and after a brief stint as a reporter/columnist/photographer for his home town newspaper, The Worthington Daily Globe, was called by his country and served as S/Sgt in the USAF 1951-55. After earning his M.A. at Marquette University, he taught at its College of Engineering for three years, thereafter earned his Ph. D. at Indiana University, and in 1963 began his 31 year teaching career at Le Moyne College, retiring in 1994. As a scholar, Gordon was most known for his work on Henry David Thoreau, work that culminated in his luminous book, ""The Roots of Walden and the Tree of Life"". It was a close examination into Thoreau's search to connect the meaning of words, the rhythms of nature, and the hand of God in the world around us, and it closely echoed the way Gordon, himself traveled through the world. Shortly after its publication, he was recognized as LeMoyne College's Scholar of the Year, something he treasured as a mark of his colleagues' esteem. The certificate hung on his bedroom wall until his very last day. Preceded in death by his parents, his brothers Louis and Douglas, and in 1992 by his beloved and incomparable wife, Grace, he is survived by sons, Joseph (Pascale) of Pittsburgh, PA, Vincent (Toinette) of NYC, Gordon (Sara) of Oswego, NY, and Louis (Margaret) of Syracuse, NY, and by daughters, Maura(Pete) Kennedy of Tarrytown, NY, Kristin (Kes Roberts) Boudreau of Worcester, MA, and Suzanne (John) Allman of Tarrytown, NY. Also surviving are grandsons, Daniel (""Duke"") Allman, William Boudreau-Roberts, and Oliver Boudreau, and granddaughters, Frances (""Sissy"") Allman, Grace Boudreau-Roberts and Annabelle Boudreau. He is survived by his brother, Richard, La Crosse WI. A long time lector at St. Rose of Lima Church in No.Syracuse, he was also a Literacy Volunteer and a mentor for No. Syracuse School student writers. Above all things, he was devoted to his family-to his wife and to his seven children. Before college, career and family scattered the branches of the family tree, very few Sundays ever passed without the entire troop making their way through some forested hike, and he provisioned each with the education and appetite for a full life, lived in the reflection of his example. He ended the acknowledgments of his book by invoking the image of his family, as it once was with father and mother together, sitting around a dinner table once more, clean fingernails all around. May it come to pass. Following Covid guidelines, private calling hours are live streamed Wednesday, November 25th from Fergerson Funeral Home, 215 South Main St., North Syracuse followed by live streamed Mass of Christian Burial via stroseny.org at 10:30 am and at St. Rose of Lima Church, 409 South Main Street, North Syracuse. Burial, with military honors, will be in North Syracuse Cemetery, 555 South Bay Road, North Syracuse. In lieu of flowers, Dr. Boudreau's family asks those who wish to remember Gordon with a gift to make a contribution to the Gordon Boudreau Endowed Fund, established at LeMoyne College to support student and faculty scholarship in the Department of English. Gifts may be made online at LeMoyne.edu/give or mailed to Le Moyne College, Office of Advancement, P.O. Box 527, Syracuse, N.Y. 13214, specifying the gifts for this Fund. Inquiries can be made to Ms. Jane Brown at: [email protected]

The family of Dr. Gordon V. Boudreau created this Life Tributes page to make it easy to share your memories.

Send flowers to the Boudreau family.