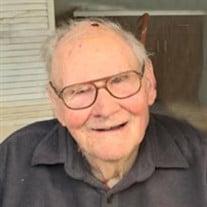 Harold P. Naumann, Jr. 96, passed away on Sunday, September 12, 2021 at the Eastern Star Home, Oriskany, NY. He was born in Syracuse, NY, on July 4, 1925, the son of Harold P. and Lillian (Reese) Naumann. Including his parents, he is predeceased by his daughter, Karen Wright; his sister, Marian Williams; two grandsons, Scott Wright and Nicholas Naumann. A proud Navy veteran of World War II, Harold served as a radio operator on the communications ship, the USS Mount McKinley. After the war, he joined his father in an insurance agency founded by his dad. After retirement from the business, he worked for Sweetheart Market in North Syracuse. Harold was a 74 year member of Salt Springs Lodge, No. 520, Free and Accepted Masons, serving as Master in 1955. He loved helping and traveling with the Roxboro Road Junior High School marching band while his four children played in the band. He loved playing cards and listening to old Harry James recordings. He was a loving father and devoted husband. Surviving are his wife of 73 years, Dorothy (Cortright) Naumann; three children, Harold Bruce Naumann, Zephyerhills, FL, Susan E. (Joseph) Valentino, Liverpool, NY, and Donald R. (Sharon) Naumann, Huntington, MD; grandchildren, Amy Gosselin, Eric Naumann, Wendy Naumann, Cindy Wright, Joseph Valentino, Vincent Valentino, Benjamin Naumann, Jacob Naumann, Christian Naumann and sixteen great grandchildren. Visitation will be from 10 am to 11 am followed by masonic and religious services at 11 am on Friday, September 17th at the Chapel of the Eastern Star Campus, 1400 Utica Road, Oriskany, NY. Burial, with military honors, will follow services at 2 pm in North Syracuse Cemetery, 555 South Bay Road, North Syracuse, NY. The family wishes to thank the staff of the Eastern Star Home for everything they did for our Dad and the loving care they continue to give our Mom. Donations may be made, in lieu of flowers, to the Activity Fund of the Eastern Star Home, PO Box 959, Oriskany, NY 13424-0959.

Harold P. Naumann, Jr. 96, passed away on Sunday, September 12, 2021 at the Eastern Star Home, Oriskany, NY. He was born in Syracuse, NY, on July 4, 1925, the son of Harold P. and Lillian (Reese) Naumann. Including his parents, he is predeceased... View Obituary & Service Information

The family of Harold Peter Naumann, Jr. created this Life Tributes page to make it easy to share your memories.