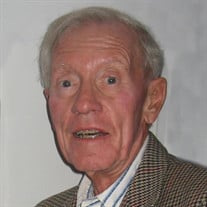 Hugh Vinton Harvey, Jr., 91, of Coral Springs, Florida passed away on Sunday. Born in North Syracuse to the late Hugh V. and Leona M. (Webster) Harvey, Sr., he was a Village resident until 2013. He graduated from North Syracuse High School in 1948 and Niagara University in 1952. In his younger years, he worked with family at the Harvey Brother’s Quality Food Store and was an advertising sales agent for the Scotsman Pennysaver until retirement. He was a distributor for the evening Herald Journal, managing 400 paperboys. Hugh was a member of Bishop Curley Council and Jeremiah McCarthy Assembly, Knights of Columbus and a communicant of St. Rose of Lima Church, North Syracuse. For 33 years, he was treasurer of the North Syracuse Cemetery Association and served as a Village of North Syracuse trustee. Predeceased his son, Mark, on June 10, 2018 and his wife of 54 years, the former Francine Longwinter on October 12, 2005, Hugh is survived by a son, Scott F. (Joan) Harvey; daughter-in-law, Alexandra Harvey; granddaughter, Kelsey Harvey; a brother, John (Alice) Harvey; a niece and two nephews. Calling hours from 9 am will precede services at 10:30 am on Saturday, January 30th at Fergerson Funeral Home, 215 South Main Street, North Syracuse followed by burial in North Syracuse Cemetery. Donations may be made to NAVAC, PO Box 215, North Syracuse, 13212-0215 http://www.navac.org/help.html

The family of Hugh Vinton Harvey, Jr. created this Life Tributes page to make it easy to share your memories.