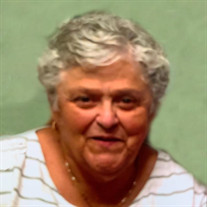 Janice E. (Boyer) Naumann passed away March 4, 2021 from complications of kidney failure and dementia at Woodbridge Care Center in Tampa, Florida. Jan was born July 29, 1948 in Malone New York, the daughter of the late Richard O. and Irene (White) Boyer. A 1967 graduate of North Syracuse Central High School, she worked 33 years for K-Mart, starting in the jewelry department, of the Mattydale store in 1968. She was a member of North Syracuse Baptist Church and was Past Matron of Centerville Chapter #185, Order of the Eastern Star. Jan loved crafts, cross stitch, knitting, quilting and most of all, jewelry making. For many years she traveled to craft fairs selling her jewelry and at one time operated Jan’s Beads and Artisan Gallery in Mattydale. In addition to her parents, she was predeceased by her brother, Richard. She leaves behind her husband of 29 years, H. Bruce Naumann and two sisters, Ann Dalesandro and Shirley Pierce, both of Florida. Also surviving are her nieces, Jessica Gradolph and Christine Bumpus; a nephew, Joseph Dalesandro; a step son, Eric Naumann; a step daughter, Wendy Naumann and five grandchildren. Calling Hours will be from 4 to 7 pm on Thursday, March 11, 2021 at Fergerson Funeral Home, 215 South Main Street, North Syracuse. Funeral services will be held at the funeral home on Friday at 10 am and live streamed at FergersonFuneralHome.com/live-cam/ followed by burial in North Syracuse Cemetery. In lieu of flowers, donations can be made to the National Kidney Foundation, 30 East 33rd Street, New York, NY 10016, kidney.org/donation, or the American Diabetes Foundation, PO Box 7023, Merrifield, VA 22116-7023, diabetes.org/donate.

The family of Janice E. Naumann created this Life Tributes page to make it easy to share your memories.

Send flowers to the Naumann family.