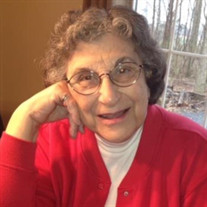 Marguerite M. Shaffer, 88, of North Syracuse, passed away Wednesday. Born in Schenectady into the Italian immigrant family of the late Anthony and Mary (Prozzo) DeBrino, she was a first generation American, the youngest and last surviving of their eight children. She is also predeceased by her husband of 63 years, Adam F. Shaffer in 2018, her brothers, Joseph DeBrino, Michael DeBrino and Edward DeBrino and sisters, Evelyn Cornelius, Julia Stone, Helen DeBrino and Marie Mrozinski. She was a graduate of Nott Terrace High School in Schenectady. Married on September 3, 1955, Marge and Adam first lived in Schenectady, then Hudson and finally moved to North Syracuse in 1963 where she lived for 45 years. She worked for many years as the Secretary of the Adult Education Program in North Syracuse, beginning in its early stages, and was instrumental in its conversion over to BOCES at the end of her career. During retirement, she enjoyed weekly water aerobics and walking dates with friends and neighbors, and her monthly luncheons with co-workers. She was part of the North Syracuse Village Singers group and was involved with The Sweet Adelines in various capacities. She never lost her love of music and continued to play piano and sing for as long as she could. Marge was very active in community volunteer work, including Meals on Wheels, visiting nursing homes and the St. Rose of Lima Parish Council, just to name a few. She always set the example to help people and hopefully inspired others to do the same. Being with family was of most importance to her. Whether it was acting as the Den Mother for her boys Cub Scout pack or helping her daughters Girl Scout troops when they were young, to being involved in various other groups or activities as her children grew over the years. She was always there to give advice as they navigated life into adulthood and beyond. She then carried on to the next generation by supporting and helping her grandchildren in many ways. One of her favorite family events that was very special to her was gathering on Christmas Eve. That tied together her love of family and faith and is ingrained in our hearts forever. She also leaves behind hundreds of treasured memories for family and friends after 5 decades of summers and fun spent on the St. Lawrence River in the 1000 Islands, especially the family and friends clambake to celebrate her and Adam’s wedding anniversary every year. Surviving are her children, Ernest (Scott Gillis) Shaffer, Adam (Karen Bullard) Shaffer, Vincent (Kristin) Shaffer, Lillian (Paul Franks) Shaffer, Christine (Richard) Ravas and Patricia (George) Normoyle; eleven grandchildren; four great-grandchildren and many nieces and nephews. Calling hours will be Sunday, January 24th from 2 to 5 pm at Fergerson Funeral home, 215 South Main Street, North Syracuse with live streaming at FergersonFuneralHome.com. Mass of Christian Burial will be Monday, January 25th at 10:30 am at St. Rose of Lima Church, 409 South Main Street, North Syracuse followed by entombment in St. Mary's Resurrection Chapel Mausoleum. Donations may be made to the American Cancer Society, https://www.cancer.org/involved/donate.html or to St. Rose of Lima, https://stroseny.org/st-rose-church/giving/

Marguerite M. Shaffer, 88, of North Syracuse, passed away Wednesday. Born in Schenectady into the Italian immigrant family of the late Anthony and Mary (Prozzo) DeBrino, she was a first generation American, the youngest and last surviving of... View Obituary & Service Information

The family of Marguerite M. Shaffer created this Life Tributes page to make it easy to share your memories.

Send flowers to the Shaffer family.