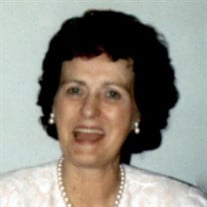 Mary T. Hynes, 96, of Mattydale, passed away on Sunday, July 18, 2021 at St. Joseph’s Hospital. Mary was born October 15, 1924 in Monkstown, County Cork, Ireland, one of nine children. She met her husband, William, in London during WWII. They moved to Toronto, Canada, after the war and married in July of 1948. With stays in Miami and Boston, the couple ended up in Syracuse, NY in the early 1950’s. Mary worked at several banks in the local area while raising five boys. Preceded in death by her husband, William, in 1986, she is survived by sons, William (Suzanne) of Minoa, Walter (Anne) of Cicero, Robert (Ellen) of Tully, Kevin (Karen) of North Syracuse and Brian of Mattydale; eight grandchildren and three great-grandchildren. Calling hours will be Thursday, July 22nd from 5:00 p.m. to 8:00 p.m. at Fergerson Funeral Home, 215 South Main Street, North Syracuse. A Mass of Christian Burial offered at 11 a.m. on Friday, July 23rd at St. Margaret’s Church, Mattydale with burial following in North Syracuse Cemetery. Donations may be made to charity.

The family of Mary T. Hynes created this Life Tributes page to make it easy to share your memories.

Send flowers to the Hynes family.