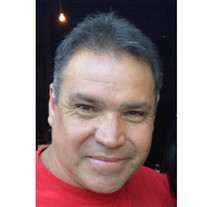 Michael Paul Smith, a father, friend, and helper to all, started his journey towards the Sky World on January 19, 2022. He was a member of the Haudenosaunee Onondaga Nation, Eel Clan. Born in Syracuse on October 3, 1963, Michael grew up in Baldwinsville where he graduated from Charles W. Baker High School in 1981. He excelled in many sports, especially football, in which he played defensive end and cornerback. He then attended Cornell University, where he continued to play football and had an interest in architecture. He was known to friends as "Mr. Smiley" due to his nature to smile on all sorts of occasions, uplifting people's spirits. Michael was a hard worker and started to work as an apprentice electrician at age 15 before joining the IBEW Local 43 union of electricians formally in 1990. His work can be seen today at the Carousel Center (Destiny USA), Syracuse University, Griffis Air Force Base in Rome, and many more projects. He was also quite proud in working to help build the Onondaga Nation Arena, Tsha’ Hon’nonyen’dakhwa’. Indeed, Michael's craftsmanship can be seen all around Central New York, establishing long-lasting friendships with his co-workers and becoming Knapp Electric's most dedicated employee. Michael always considered himself a simple man. If he could just help others out with fixing up their house, or spend a Sunday in front of a Minnesota Vikings game on TV, he would be on top of the world. He had a headstrong, confident attitude about himself, which made him all the more willing to help people in need no matter how big the issue. He had a colorful, charismatic personality, which had helped him amassed a gigantic friend network. His friends from Baldwinsville, to Cornell, to his weekend gatherings in Alexandria Bay, his work buddies, even total strangers; the tremendous outpouring of love and support shows that he meant something dear, deep to a community of peers. His love also extended to animals, in which his spirit animal was deemed to be that of a turtle. Michael would always help turtles cross the road if he found one struggling, even if it would make him late for work. He was also an avid lover of Labradors; dogs Hannah and Bailey can find comfort that they will be greeted by their old master very soon. Michael was an admirer of nature, so much so that the city life didn’t quite suit him. Loud noises, being closed in by skyscrapers, it was not part of his ideal living. He would rather be in the woods, or close to the river, where he could take a little walk, do some boating, and look at the stars with friends. Michael was pre-deceased by his wife, Patricia Ann Chesbro-Smith, and fiancé Elizabeth Ann Tillery. Surviving are his wife Jennifer Fenton Charron; mothers, Janet Bengar and Eloise Giordano; his father, Vincent Giordano and wife Nancy; his brother, Vincent Giordano III and sister, Cynthia DeRubertis; his three sons, Derrick with wife Amanda, Brandon with daughter Mariah Rose Smith, and Austin with wife Mengshu; and countless other family members and friends who have been impacted by Michael's kindness and generosity. To honor Michael's wishes, no formal funeral services are to be held. A Celebration of Life gathering is being planned for the Summer.

Michael Paul Smith, a father, friend, and helper to all, started his journey towards the Sky World on January 19, 2022. He was a member of the Haudenosaunee Onondaga Nation, Eel Clan. Born in Syracuse on October 3, 1963, Michael grew up in... View Obituary & Service Information

The family of Michael P Smith created this Life Tributes page to make it easy to share your memories.

Michael Paul Smith, a father, friend, and helper to all, started...