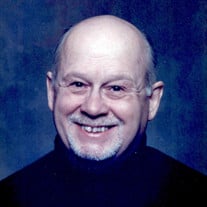 Patrick H. Williamson, 80, of North Syracuse, passed away on Wednesday, February 2, 2022, surrounded by his loving family. Born and raised in Fulton, NY, he was the son of the late Harry A. and Catherine (Casey) Williamson. He was preceded in death by both of his siblings in 2021, John Michael Williamson and Betty Krebs. Pat was a graduate of Fulton High School and the Central City Business Institute. He retired from Lockheed Martin (General Electric) where he was a financial analyst in the heavy military division for over 40 years. While working at GE, Pat was a member and former President of the GE Foreman’s Association. He was also an active member of the GE Elfun Society, an employee organization dedicated to volunteerism and community service. Pat also spent time volunteering at St. Joseph’s Hospital following his retirement in 2002. Pat was an unbelievably giving husband, father and grandfather who loved spending time with his family and friends. He was very passionate about sports. In particular, he loved baseball and softball. He enjoyed coaching little league baseball for several years and was an avid softball player for over 55 years, finishing his playing days as a proud member of the Syracuse Cyclones senior softball team. When he was not playing or coaching himself, he was busy rooting on his beloved Dodgers and Syracuse Orange. Pat was a man of strong faith. He was a long-time communicant of St. Rose of Lima Church, where he was a highly active parishioner, serving as a lector and Eucharistic minister. Pat, along with his wife Donna, were a part of the first English-speaking Marriage Encounter group presentation at the Vatican in Rome, Italy, along with Msgr. Joseph M. Champlin in 1977. He is survived by his loving wife of 60 years, Donna Maria (Townsley) Williamson, and his sons, Kevin (Lori), Michael and Timothy (Amanda) Williamson. Also, surviving are four grandchildren, who knew him as their “Papa,” Zachary and Alyssa Williamson, Jessica (Alex) Klymkow and Julia (Vincent) Brigandi. Calling hours will be 4 to 7 pm on Friday, February 18th at Fergerson Funeral Home, 215 South Main Street, North Syracuse. Mass of Christian Burial offered on Saturday, February 19th at 10 am at St. Rose of Lima Church, 407 South Main Street, North Syracuse followed by burial in Our Lady of Peace Cemetery, Moyers Corners. Donations may be made to Hospice of Central NY, 990 7th North St., Liverpool, NY 13088, the American Kidney Fund, 11921 Rockville Pike, Suite 300, Rockville, MD 20852, or Upstate Golisano Children’s’ Hospital, 750 East Adams St., CAB 326, Syracuse, NY 13210.

Patrick H. Williamson, 80, of North Syracuse, passed away on Wednesday, February 2, 2022, surrounded by his loving family. Born and raised in Fulton, NY, he was the son of the late Harry A. and Catherine (Casey) Williamson. He was preceded in... View Obituary & Service Information

The family of Patrick H. Williamson created this Life Tributes page to make it easy to share your memories.

Patrick H. Williamson, 80, of North Syracuse, passed away on...

Send flowers to the Williamson family.