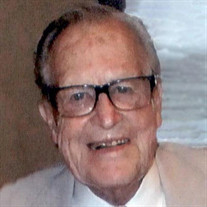 Robert “Bob” Smith, 97, passed away peacefully at Francis House on March 11th, 2022. Robert was born on October 29th, 1924 in South English, Iowa to the late Walter and Maude (Oliver) Smith and was also predeceased by his brother, Clarence. He graduated from high school in Keota, Iowa, attended Parsons College, Texas Tech University, and graduated from Drake University with a law major. He was employed 37 years by Equifax and retired in 1987 as District Sales Manager for Upstate New York. Robert truly enjoyed sports, having played semi-pro football, softball and being an avid golfer. He was a member of Beaver Meadows Golf Club for many years and former member of Toastmasters Club, Lions Club and American Legion. He was a member of Faith Journey United Methodist Church (formerly Andrews Memorial United Methodist Church). Robert served three years in the U.S. Army Air Corps (USAAF) during World War II on B-17 and B-29 bombers. Robert loved spending time with his family and friends. He had a true zest for life along with a playful and spirited nature. He is survived by his beloved wife of 71 years, Wilma Leone; daughter, Cindi Besio-Clement (Bill); grandchildren, Jeff Besio (Caitlin) and Chelsea Foley (Michael), and the lights of his life, great grandchildren, Colin Foley, Claire Foley, Emily Besio, and Henry Besio. The family would like to thank everyone on 6N at Crouse Hospital and Dr. Melinda McMinn for the wonderful care they provided along with those from Hospice and Francis House. The family will greet friends on Wednesday, March 23, 2022 from 10 am until the service at 11 am at Faith Journey UMC. Donations may be made to Faith Journey UMC, 8396 Morgan Road, Clay, NY 13041 or The Palliative Medicine Service, c/o Crouse Hospital, 736 Irving Avenue, Syracuse, NY 13210.

The family of Robert W. Smith created this Life Tributes page to make it easy to share your memories.