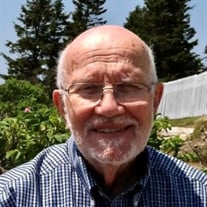 Wesley R. "Wes" Andrews, 90, went to be with his Lord on August 5, 2021. He was a loving husband, a caring father, stepfather and grandfather, a loyal friend, and someone on whom everyone he worked alongside could depend. He had a gentle wisdom that was greatly valued by all who knew him. Wes was born in Springfield, MA on May 19, 1931, son of Wesley J. and Alyce (Gray) Andrews. After receiving his diploma in radio engineering in 1952 from Valparaiso Technical Institute in Indiana, he moved to Syracuse, NY, where he lived for 69 years. He served in the U.S. Army Signal Corps from 1954-56. He was employed by General Electric for 37 years, primarily in GE's Heavy Military Division. He had a lifelong interest in radio and was a member of the Radio Amateurs of Greater Syracuse (R.A.G.S.), as well as a woodworkers' club and the Syracuse GE Elfun Society. He also served on the deacon board of Mallory Baptist Church and later of Calvary Baptist Church, Brewerton, NY. He was predeceased by his first wife of 44 years, Loretta “Lori” (Volkmer) Andrews, his daughter, Susan E. Szepek, a grandson, Robert L. Szepek, and sisters, Shirley ("Mike") Michaels and Adelyn (Roland) Morneau. He will be greatly missed by his surviving family; his wife of 22 years, Joyce E. (Bishop) Blaisdell Andrews; a sister, Virginia (Milt) Miermaster; his daughters, Karen (Richard) Robinson and Julie (Michael) Roush; his sons, Jeffrey (Toni) Andrews and Timothy (Janice) Andrews; his stepdaughters, Christine (John) Bolton, Cathy Willson, and Emily (Scott) Lacik; a stepson, Scott Blaisdell; grandchildren Timothy, James, Stephen, Rebecca, Michael, Sarah, Jennifer, Katie, Joannah, Lindsey, Jeffrey, Justin, Melissa, Joshua, Amy, Nathan, Benjamin, Joshua, Seana, Jordan, Sydney, Johnny, Lori Beth, Matthew, and 25 great-grandchildren. Thursday, August 19th a calling hour will precede services from 10 a.m. to 11 a.m. at Calvary Baptist Church, 9251 Brewerton Road, Brewerton. Burial with military honors will be at 1:45 p.m. in Pine Plains Cemetery, Clay. In lieu of flowers, donations in honor of Wes may be made to High Braes Refuge, 196 Waterbury Rd., Redfield, NY 13437; Child Evangelism Fellowship, 109 Ferndale Dr., Syracuse, NY 13205; or Eagle Wings Academy c/o Faith Heritage Christian School, 3740 Midland Ave., Syracuse, NY 13205.

Wesley R. "Wes" Andrews, 90, went to be with his Lord on August 5, 2021. He was a loving husband, a caring father, stepfather and grandfather, a loyal friend, and someone on whom everyone he worked alongside could depend. He had a gentle wisdom... View Obituary & Service Information

The family of Wesley R. Andrews created this Life Tributes page to make it easy to share your memories.

Send flowers to the Andrews family.